skip to main | skip to sidebar

Occasionally however, they post something that's a bit... more.

This is one of them. If I ever have children, this is what I would try my hardest to teach them.

THE HOT COLD TRUTH, AND THE SECRET TO HAPPINESS

Now if I can just manage to live it myself, I might even get the chance.
Posted by Spanky Harrison at 9:16 AM No comments:

Woo! Another box sorted. I'm running out of space on my shelf though. I may have to start stacking some of the less-represented sets with each other...

Bluh, going through all of these cards sort of makes me want to play again. It also reminds me of why I moved from cards to miniatures.

See, back when I played magic, I would usually build decks based around a particular creature type or general theme. I really enjoyed building a narrative around my games. Imagining my armies of loyal soldiers grinding down my opponent via coordinated tactics, or my legions of knights rendered invulnerable by faith and courage. That underlying narrative was really what drew me into Magic in the first place, and it worked out pretty well at first, because that's how most of my friends played as well. Seeing all the old cards again brings back some of those memories.

Unfortunately, as time passed, decks became less about narrative or theme, and more about crushing combos. (aka, what M:TG is really about) That really soured it for me, and I stopped playing about half way through High School.

However, that's when I really started getting into miniatures games. The whole idea of each game having an underlying narrative was much stronger in miniature wargames than in Magic. The tiny drama's that unfold on the table top are a core element of the experience, and that's what really draws me to them to this day.

Anyway, Im going to keep trying for a box a day until I'm done. Then I guess I'll try to sort out the rares or something. Not sure how exactly I'm going to try and sell them yet. I'm hoping I can just get a decent offer for the whole pile from a local shop, but I worry that they will low-ball me a bit too hard. I'm not looking for top dollar or anything, but I would at least like to get an average of a few cents a card.
Posted by Spanky Harrison at 3:28 PM No comments: 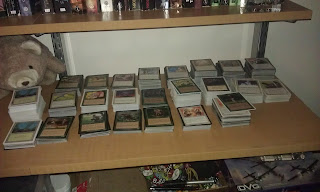 So I have finally started sorting my magic cards by set, as I hope to sell them for some non-trivial amount of money. And hey, look at all the ones I sorted already! It didn't even take that long!

Now, lets just check to see how many more I have to gOH GOD. 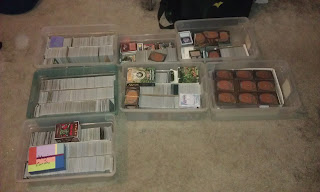 Yea, this is gonna take a while. All those cards up there? That little empty spot in the box on the top left. That's how many that was -_- 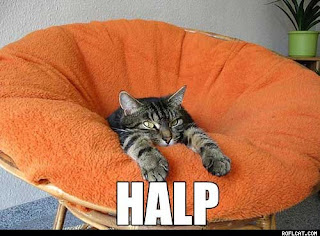 Posted by Spanky Harrison at 7:54 PM No comments: 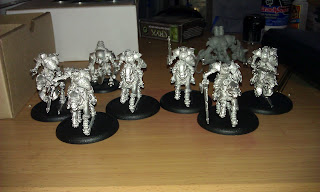 So I got my order in from Spikeybits yesterday, and there it is assembled!

I got a second Hunter and a plastic Sentinel (which exemplifies everything I both love and hate about the new Privateer plastic kits) but more importantly, two boxes of Storm Lances!

Assembly wasn't too bad, though the lances themselves were all bent up, and the little pommel bits on the back were all bent un-recoverably. That wasn't that big of a deal however, since I had intended to extend the back part of the lances with pins anyway.

After getting them all assembled, I actually got a game in with Pat on our fancy new table.

He was playing a Grissel1 list with a Bomber, an Earthborn, an Impaler, Krielstone + UA, Janissa, and two full units of Champions. (blech)

I was playing an upscaled version of a Haley1 list that I had made as an anti-hordes counterpart to a Nemo1 list. My list was Haley1, a squire, Rowdy, Gunmages + UA marshaling two hunters, Viktor Pendrake, a Journeyman, Epic Eiryss, Laddermore, and 5 Storm Lances.

The scenario was Supply and Demand? I think? Anyway, it was the one where there is an objective in the middle of a12" zone on each side, and you score by controlling the objective on your side while contesting the zone on their side.

The terrain on the board was fairly heavy, and I was a bit concerned by my almost complete lack of pathfinder, but it ended up being much more of an issue for Pat's trolls.

I went first and ran pretty much everything but the journeyman, who put Arcane shield on Laddermore. Laddermore and the Lances ran up on my left flank to threaten Pat's zone, while everything else ran into my zone. Pat had his army run up similarly, with the Bomber across from my lances, and the Earthborn bearing down on Haley on my right. The Champions pretty much just formed a wall across the middle in front of the krielstone.

On my second turn, Haley put arcane shield on the storm lances and cast temporal barrier. The hunters took their shots at some champions, killing one and wounding another. The gun mages pushed the earthborn back a little, and pushed a few champions around as well. The storm lances and laddermore shuffled around a bit. Temporal Barrier put Pat on the back foot, and he didn't do much on his second turn. He moved the Earthborn closer, and his bomber threw some bombs at laddermore, only doing a few damage to her. The champions moved a little closer, but the unit that was moving to threaten my zone got bogged down on some ruins in the middle of the table.

On my third turn, Haley moved up for some better temporal barrier positioning, and re-cast it. Pendrake put beast lore on the gunmages, and the hunters continued to put shots into the champions, thinning their numbers slightly. The Storm Lances and Laddermore did a bit of a caracole with ride by attacks, putting a surprising amount of damage on the Bomber. The Gun mages pushed things around a bit more. Oh, and Eiryss moved up the right flank and shot Hallowed avenger off of the Earthborn. I also moved one of the Lances into Pat's zone, contesting it and getting me a point. Pat moved his champions up farther, and the Bomber charged the storm lance that was in the zone, killing it, barely. The Earthborn walked up to the hunter, and Rowdy counter-charged it (mistake on my part) doing pretty much nothing, and then the EB trashed Rowdy. However, that was pretty much it for pat's turn.

On my fourth turn, the Journeyman and Eiryss together killed Janissa, one of the hunters moved in between the remaining champions and shot the bomber for some damage. Pendrake put beast lore on the Gunmages again, and Haley cast TB, feated, and Threw a chain-lighting into the hunter that had moved up, zapping a few Krielstone bearers, and then shot a few more with her hand-cannon. The gunmages thunderbolted the pants off of everything, pushing the EB back quite a bit, and gunning down pretty much all of the stone bearers. The other Hunter put some damage onto Grissel, and the storm lances finished off the bomber, while laddermore killed a champion. I scored another point. Pat was pretty much down to one last gambit at this point, and it ended when the Earthborn was 7 and 3/4" away from Haley, instead of 7 and 1/2".

Overall, I was really pleased with how the Storm Lances did. I definitely made some bone-headed mistakes, primarily not paying close enough attention to the EB's walking threat range. Pat got really bogged down by the ruins in the middle, and I think that how effective Temporal Barrier was really threw him off his game, since he wasn't familiar with it before hand.

Regardless, I am looking forward to getting in more games now that we have a table and terrain here at home!
Posted by Spanky Harrison at 4:04 PM No comments: